ROGER J. WOOLGER, PH.D, was best-known for his ground-breaking work in the field of regression therapy, which he developed from his background and training as a Jungian analyst.  He held degrees in psychology, religion and philosophy from Oxford and London Universities; during his time at Oxford he acted as an amanuensis to the English anthropologist and psychologist John Layard; within Layard`s circle he is likely to have met those who were well-known to Carl Jung. Roger taught at Vassar College, the University of Vermont and Concordia University, Montreal and led workshops at the New York Open Center, Esalen Institute and Omega Institute.

However, Roger`s knowledge, experience of, and passion for many streams of different esoteric traditions also made him much in demand world-wide as a conference speaker; additionally,  as a long-standing serious medieval scholar he ran tours to the South of France on the themes of the Black Madonna, the Grail legends and the Cathars, which in turn attracted many pilgrim travellers.

A LOVER OF SECRETS

With his life-long passion for study and deep knowledge of esoteric traditions and what is sometimes known as the "perennial philosophy" , Roger stood back from a single viewpoint of commitment to any one school of thought.  His lucidity as speaker & teacher enabled him to present for fellow-explorers of the esoteric a wide and syncretic view of many traditions, and to place them in a much broader and more accessible context, with a focus  on the individual experience of spirituality, rather than the organisation or structure of any particulars  traditions.

Some of Roger Woolgers articles to download for free, please go to the articles tab under Books or click here

The Woolger Institute for Psyche and Spiritual Awareness - founded by Roger Woolger & Jane May - If you would like a physical CD of any of the following conferences please contact Jane May for cost including postage - The Woolger Institute (44) (0)1865 407680  or email  woolger.uk@talk21.com

Roger Woolger reads Davids Psalm 139 - Lord, you have searched me.... 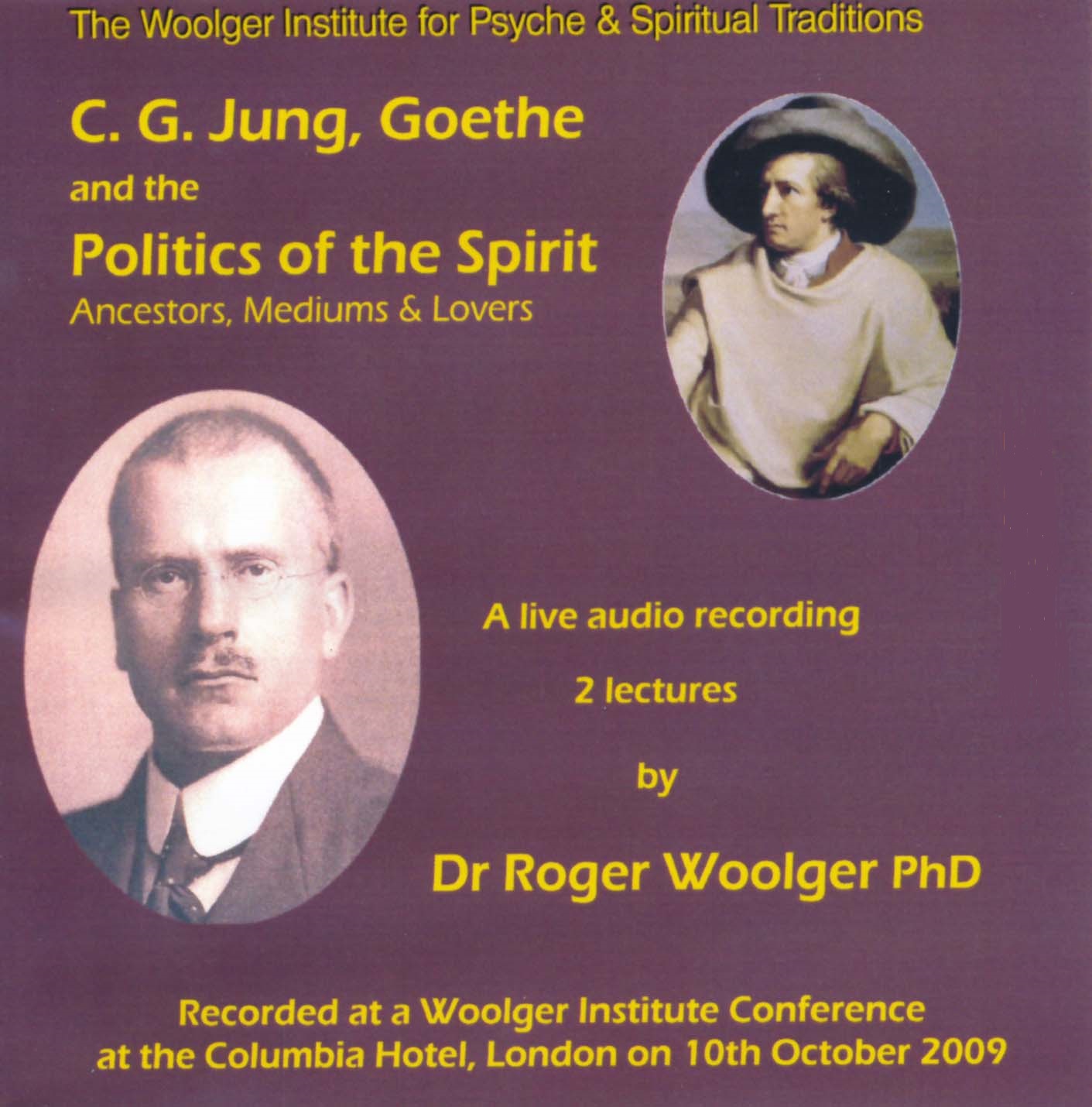 CG Jung, Goethe & The Politics of the Spirit : Ancestors, Mediums and Lovers  by Roger Woolger PhD

This stimulating and provocative day examined hither to unexplored questions regarding Jung's debt to German Romanticism, spiritualism, and Judaism through the eyes of prominent students of his life.

Content :- exploring the context of Jung’s family,  the father's side that goes back to Germany, and many hundreds of years earlier to practising alchemists as well possibly to Goethe. On his mothers side of the family, this is where we're going to meet the whole question of mediumship, channelling and spirits, within the context of spiritualism and mediumship. Also discussing the immensely rich culture that existed in Germany, around the time of his friend and collaborator Friedrich Schiller during what traditionally is called the Weimar period, the Weimar classical period, very much focused on Goethe and his circle and his friends. Including looking at Jung’s relationship in the context of his general spiritual journey. His relationship to the Kabbalah, and Jewish spirituality, what is surprising because most people are not familiar with that part of Jung. There is just a little bit in his autobiography. But it's a very big piece of Jung’s later spiritual life, and paradoxically, began to develop during the period when he gets into trouble politically.

Listen to a short clip of the conference 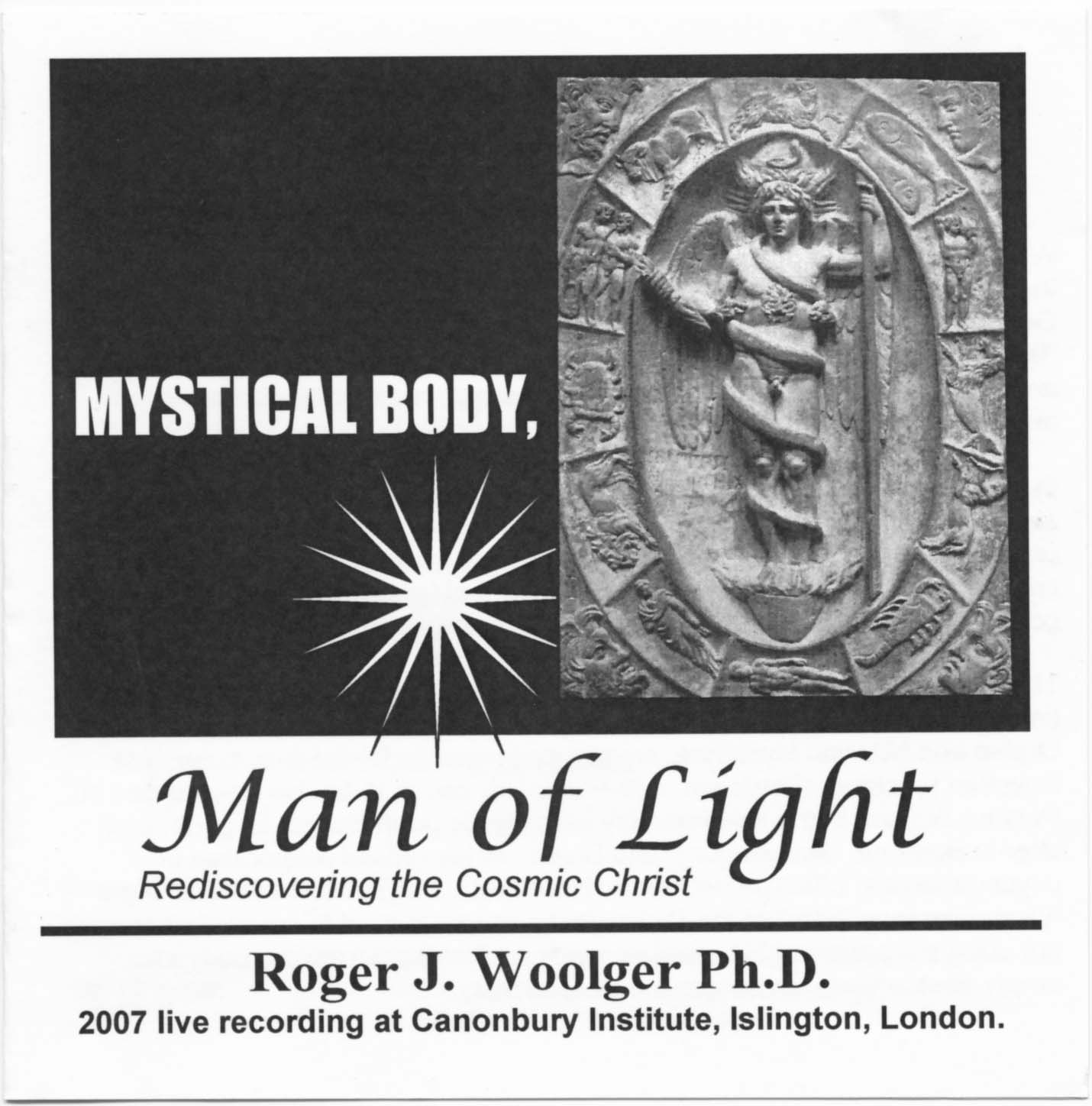 Mystical Body, Man of Light: The Lost Secret of the Cosmic Christ by Roger Woolger PhD

The Woolger Institute presents Roger Woolger PhD. in a live recording of a lecture given at Canonbury Institute London in 2007.

What sets Christianity apart from most other religions is the Mystery of the Incarnation:  that Jesus was both Man and God, and that His Being, as Corpus Christi, rules the whole universe.  Behind Saint John`s teaching that "the Word was made flesh" is the cosmic Logos of the Jewish mystic Philo and with it a dazzling array of images of Anthropos or Adam Kadmon, the androgynous Universal or Comic Man.

In this lost teaching the symbol of the Cross is revealed to be more than a sacrificial reference, but holds the secret of the transcendent intersection that unites heaven and earth, spirit and nature, body and soul. Then around the cosmic cross is entwined the cosmic Serpent of “great creating Nature” who governs every great world cycle as Aeon, cosmic time.

The Man of Light, as later Sufis called Him, pervades the universe and every created thing in a human yet spiritual form. His image is to be found in the Orphic and Mithraic Mysteries, among early gnostic Christians, in Ancient Egyptian teaching, Platonism, neo-Platonism and in India. He re-emerges in Persian Sufism, in the ninth century Irish mystic John Scotus Erigena, and later in Boehme, Swedenborg and Blake. In his radical reappraisal of psychoanalysis, Life Against Death, Norman O. Brown calls this teaching a “Dionysian mysticism” of the Divine Body, much needed to counterbalance our culture’s preferred “Apollonian mysticism” of flight from the body into empty abstractions and ungrounded spirituality.

Listen to a short clip of the Mystical Body, Man of Light: Conference 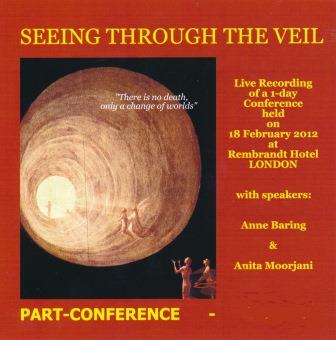 Seeing through the veil

The Woolger Institute presents a live recording of a 1-day conference held on 18 February 202 with speakers: Anne Bariing and Anita Moorani.
Anne discusses how current beliefs about death and the censorship of material on non-ordinary experiences constrict the human spirit and limit the horizon of our sight. She explores the approach to death of earlier cultures and also the idea of the ‘subtle’ or ‘light’ body that offers us a very different understanding of the survival of the soul. Could it be that the apparent finality of death is the greatest of our illusions? Relinquishing old beliefs can alleviate the trauma of bereavement and give us trust and hope in our survival.

Anita speaks about her remarkable near death experience, which took place during what was supposed to be her final hours of life. She felt as though she entered another dimension and was faced with a choice of whether to return to life or not.  Although seemingly in a coma to all who were observing, she experienced heightened awareness of everything that was taking place around her, as well as great clarity and understanding of her life and purpose here on earth.  Anita subsequently chose to return to life when she understood that ‘heaven’ is a state, and not a place. This subsequently led to a remarkable and complete recovery of her health. 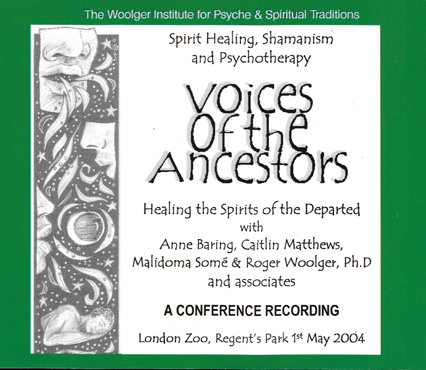 Voices of the Ancestors

The Woolger Institute held a 1-day conference on Spirit Healing, Shamanism & Psychotherapy on May 1st 2004, this is the live recording.
A day of talks, discussions and Healing Rituals of our Ancestors with speakers:
Malidoma Some - African Shaman author Of Water and the Spirit
Anne Baring Jungian psychotherapist co-author of The Myth of the Goddess
Roger Wooger Psychotherapist, teacher author of Other Lives, Other Selves.
"most non-western cultures have rituals and practieces to facilitate the safe passage of departing spirits to the other side after death. this ensures that unhappy ancestral spirits lierally no longer "hang around" the living, draiing energy and having an invisible influence on us...." 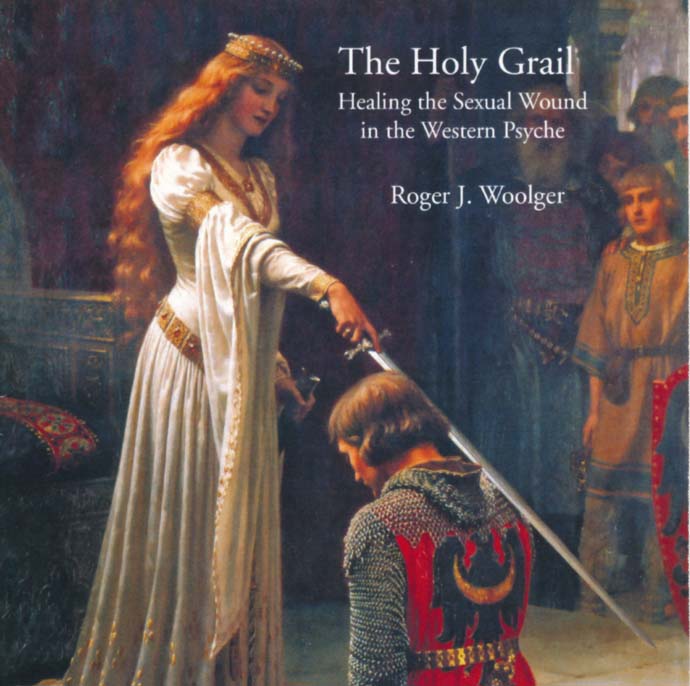 The Holy Grail: Healing the Sexual Wound in the Western Psyche

Roger Woolger PhD - In the following essay I shall attempt to show how we can read the myths and legends of the eleventh and twelfth centuries as the collective dreams of the mid-term crisis of the Christian era. As an example of this we will apply C.G. Jung’s method of dream interpretations to the important work to Chretien de Troyes’ version of the Grail legend.”

Part 1 - Introduction, the historical context of the Grail Legend, the troubadours, The Cult of the Lady, The Great Goddess, The Psychological Significance of Chivalry, Heresy, Gnosticism and sexuality, An underground Church of Love, The troubadours Music, The Piscean Problem.

Part 2 - An interpretation of the Grail Legend, Percival the Hero, The Fisher King, What is the Grail? The light of the Grail & conclusion

Listen to a short clip of the conference. 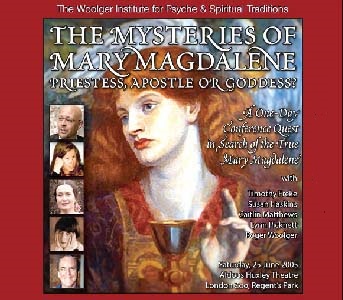 The Mysteries of Mary Magdalene: Priestess, Apostle or Goddess